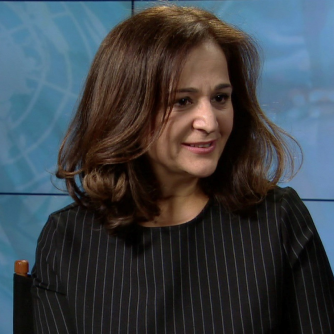 A senior executive and philanthropist, Atefeh (Atti) Riazi has served in both the public and private sectors as a CIO, managing large‐scale technology projects and initiatives. She is presently the Interim chief Digital Officer at Memorial Sloan Kettering where she started as the CIO in 2019. In this role, she oversees the integration of data and technology resources across MSK and develops the data and digital platforms that will enable MSK to meet critical patient care and research objectives.

For over 7 years she held the post of Assistant Secretary‐General and Chief Information Technology Officer of the United Nations, transforming the technology function into a strategic partner. Atti is also the Executive Director of the nonprofit CIOs Without Borders. Earlier, Atti was the Executive Vice President and CIO of the New York City Housing Authority (NYCHA)— also acting as its General Manager, responsible for a $3B organization staffed by over 12K employees.

Prior to that, Atti served as the global CIO of communications giant Ogilvy & Mather for over nine years, overseeing all technology across 400 offices in 100 countries. In her preceding role as the Vice President and CIO of MTA New York City Transit, Atti implemented the
extraordinarily successful $2B automated fare collection system (MetroCard). Atti has published many articles and studies. She speaks frequently on issues involving technology for social good, responsible innovation, and cybersecurity.